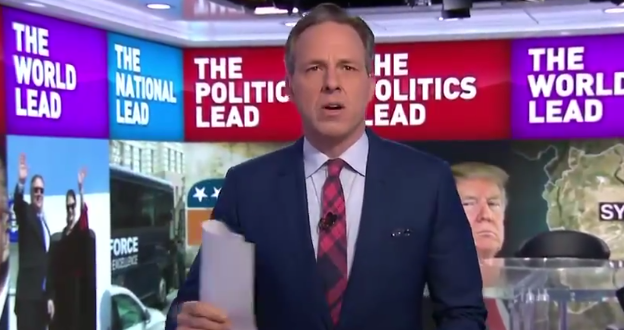 Tapper: Trump Told The Taliban That Pelosi Is Coming

A visibly astonished and displeased Jake Tapper took pains to point out that when President Donald Trump ostentatiously canceled Speaker of the House Nancy Pelosi‘s secret trip (with a congressional delegation) to Afghanistan, he compromised the entire delegation by announcing “to the world, including the Taliban,” that Pelosi was headed to the war-torn region.

Tapper led Thursday’s edition of CNN’s The Lead by reporting on Trump’s last-minute cancellation of a secret trip to Belgium and Afghanistan, in apparent retaliation to Pelosi’s request for Trump to postpone his State of the Union address until the government shutdown is ended.

POTUS tells ⁦@SpeakerPelosi⁩ he is canceling her trip to Belgium, Egypt and Afghanistan because of the shutdown pic.twitter.com/rLoCl3sLGw

More precisely the president is not allowing @SpeakerPelosi and the congressional delegation to use US military aircraft to fly to Belgium (to meet with @NATO leaders) and to Afghanistan (to meet with servicemembers).

3/ A White House official told CNN that Pelosi and the delegation are welcome to fly *commercial* to Afghanistan. Which is a remarkable statement given that the WH just announced this trip to the world, a violation of all security protocols.

.@JakeTapper: Pres. Trump took the stunning step of canceling the military aircraft that were to have been used right now by Nancy Pelosi and a congressional delegation… violating decades of security protocol by publicly announcing ahead of time a secret trip to a war zone. pic.twitter.com/JCmOkjkmbd