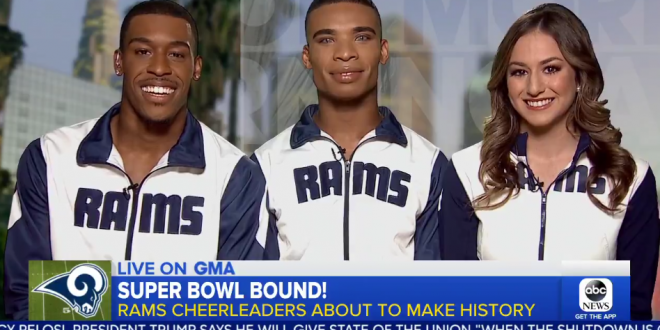 Los Angeles Rams cheerleaders Quinton Peron and Napolean Jinnies will make NFL history yet again. This time around, they will be the first-ever male cheerleaders to perform at the Super Bowl.

The two men and their coach, Emily Leibert, told “GMA” Thursday that going to the Super Bowl feels “like a fairy tale,” but it’s a result of hard work.

Peron and Jinnies made history with the L.A. Rams’ 2018 cheer squad back in March when they were officially announced as the newest members after a rigorous audition process. With that, they became the first male cheerleaders with the NFL.

Some on Twitter are discounting the “first” claim, saying that the 2013 Super Bowl featured a male cheerleader for the Baltimore Ravens. See the 2013 TMZ clip below.

These @RamsNFL cheerleaders are about to make history – male cheerleaders will be at the Super Bowl for the first time! “I’m speechless.” pic.twitter.com/MJLVicD3oI

Previous NEW YORK: Gov. Andrew Cuomo Signs Early Voting Bill Into Law After Years Of Opposition By Republicans
Next Tell-All Excerpt: The Mooch Has Bragged To Black Men About Being Hung, “I’m Black From The Waist Down”