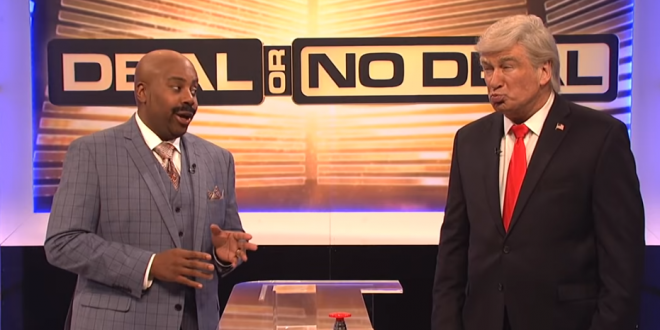 “Saturday Night Live” returned from its winter break to skewer President Trump’s attempts to end the partial government shutdown that’s been ongoing for nearly a month.

President Trump, played by Alec Baldwin, as a contestant on the television game show “Deal or No Deal,” was given an opportunity to negotiate an end to the shutdown, created by the president’s demand for $5.7 billion for a border wall and Democratic congressional leaders’ opposition to any money for the barrier.

“We decided to do this in the only format you can understand,” said host Steve Harvey, played by Kenan Thompson, “a TV game show with women holding briefcases.”

The cold open version of “Deal” involved various members of congress – from Kate McKinnon as Nancy Pelosi to Leslie Jones as Maxine Waters – offering Trump deals to end the shutdown in the game show’s trademark suitcases.

Alec Baldwin’s Trump turns down every single deal, including pastrami sandwiches, a billion dollars and calling Pelosi his mommy, before finally accepting one – from Pete Davidson in a Clemson shirt offering “hamberders.”