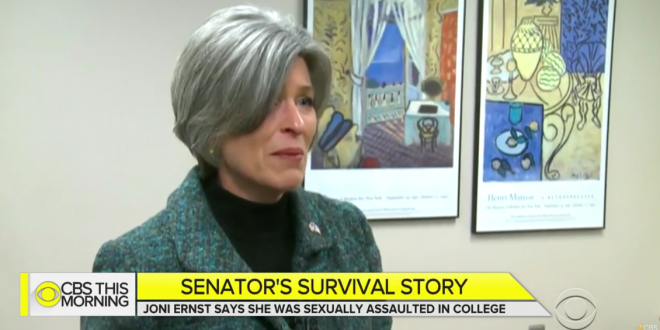 Republican Senator Joni Ernst says that she was raped in college by someone she knew and that her ex-husband physically abused her, making her one of the highest-profile women in her party to allege assaults in the era of the #MeToo movement.

Ernst publicly disclosed the rape in an interview with Bloomberg News, which she decided to do after details of her divorce from husband Gail Ernst were reported this week.

“I didn’t want to share it with anybody, and in the era of MeToo survivors, I always believed that every person is different and they will confront their demons when they’re ready,” the Iowa senator said in the interview. Her voice broke. “And I was not ready.”

Years before her divorce, U.S. Sen. Joni Ernst was assaulted by her husband after she confronted him about his relationship with their daughter’s babysitter, she wrote in court filings.

Ernst, a Republican who represents Iowa, said that during her 26-year marriage with Gail Ernst, she was the victim of verbal and mental abuse and a physical assault after which a victim’s advocate wanted to take her to a hospital, she wrote in public records connected to their divorce.

“Gail has been very cruel,” she wrote. “This has been an extremely painful journey.” Ernst in August announced through a brief statement that she and Gail Ernst were divorcing. The divorce was finalized this month.

“I’m still the same person I was a week ago.” Sen. Joni Ernst became emotional when asked by a reporter if details from divorce filings have changed her personally. (Video courtesy Angelina Salcedo/WOI-TV) pic.twitter.com/gkii7QYAJd

Ernst’s divorce filing also blames her husband for her not being named Trump’s 2016 running mate.