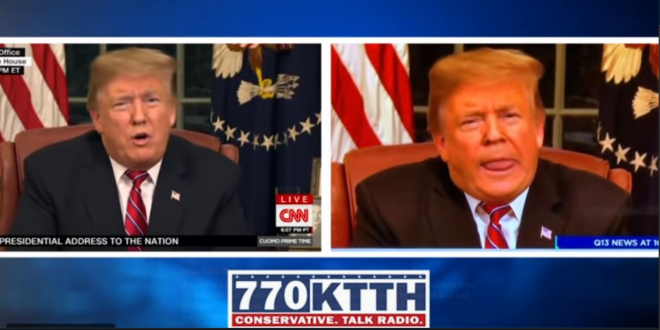 A staffer at local FOX affiliate Q13 has been fired after the station aired what appears to be a doctored video of President Donald Trump’s Tuesday night speech from the Oval Office. The video was changed to make it look as if Trump was sticking his tongue out languidly between sentences. In addition, the colors in the video look more saturated, leading the president’s skin and hair to appear more orange.

During the speech, Trump said, “Hopefully, we can rise above partisan politics in order to support national security,” before briefly licking his lips and continuing to speak. In the video broadcast on Q13, it appears that Trump lets his tongue hang out, resting it on his lower lip for an unusually long time. “This does not meet our editorial standards and we regret if it is seen as portraying the president in a negative light,” Q13 news director Erica Hill wrote.

Previous Pence To Dems: “If There’s No Wall, There’s No Deal”
Next One Million Moms Vs POM Wonderful [VIDEO]