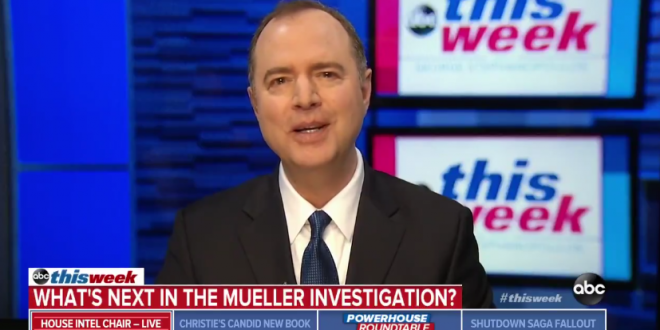 Schiff: Mueller Needs To Look At Junior For Perjury

“I’d like the special counsel to have access to Don Jr.’s testimony and determine whether it is evidence of — of false statements. I think — and I greatly appreciate the seriousness with which the special counsel takes lying to Congress — so I’ll let Bob Mueller be the judge of that. But one of the first acts, if not the first act, of our committee will be to send all of these transcripts of all the witnesses to Bob Mueller so that he can consider whether additional perjury charges are warranted.” – Rep. Adam Schiff, on ABC This Week today.

“It’s clear that Mueller’s work is not yet done. We can see clues of that in the grand jury activity,” Rep. Adam Schiff tells @ThisWeekABC days after longtime Trump associate Roger Stone was indicted by special counsel Robert Mueller https://t.co/urOEhoJMz2 pic.twitter.com/U0j9nR69TE