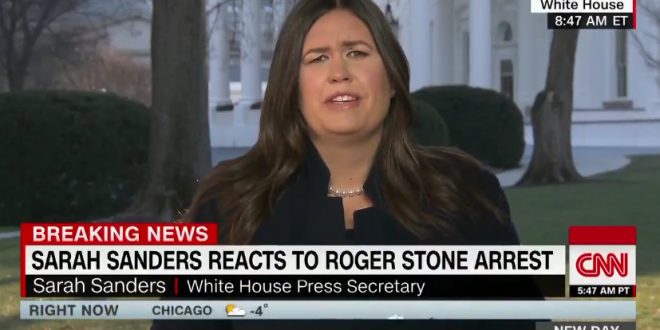 Sanders: This Has Nothing To Do With Trump [VIDEO]

Even though Stone was indicted for lying about efforts to help Trump’s campaign by getting into contact with WikiLeaks, Sanders said that the arrest “has nothing to do with the president.”

“Outlets like yours, CNN spent a significant time looking for information on Wikileaks and also reporting on it,” she said. “Does that mean CNN is guilty of collusion?”

CNN’s @JohnBerman: Did the President direct someone to have Roger Stone reach out to WikiLeaks?

Sarah Sanders on CNN says the Roger Stone indictment has “nothing to do with the president” which is definitely not a lie at all pic.twitter.com/KSTZS7bhvR

Sarah Sanders is on @NewDay today — a rare appearance by the press secretary on CNN. What it says to me: Key W.H. aides know that rah-rah hits on Fox News aren’t cutting it… https://t.co/NPdkZGflW5

Sarah Sanders on CNN just now responding to Stone indictment: “The president did nothing wrong. There was no collusion on his part.” Note that: “on his part”

.@JohnBerman: “Did the President direct someone to contact Roger Stone about stolen emails?”@PressSec: “The specific charges that have been brought against Mr. Stone don’t have anything to do with the President.”