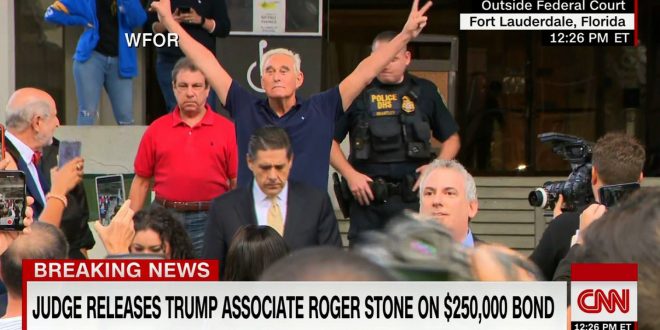 After the early morning arrest at his home, Roger Stone appeared briefly in federal court in Fort Lauderdale, Fla., wearing a blue polo shirt, jeans, and steel shackles on his wrists and ankles. The judge ordered him released on a $250,000 bond. Speaking before a raucous crowd outside the courthouse, Stone vowed to fight the case.

“I will plead not guilty to these charges. I will defeat them in court,” he said. Some in the crowd jeered and chanted “lock him up.” Others shouted support for Stone.

Roger Stone doing the Richard Nixon salute because everything is dumb. pic.twitter.com/xq19Jo0OqH

Roger Stone’s press conference is being drowned out by chants of “lock him up.”

Stone’s lawyer is complaining that the FBI scared his dog this morning.

Roger Stone is live on Alex Jones’s show, because sure, and says “they could have just contacted my attorneys” to turn himself in. He says, “It was meant to intimidate me, but I am not intimidated.” Jones then tells him to hold on and runs some ads in which Jones is screaming.

”They would like me to plead guilty to charges that are completely bogus,” Stone tells Alex Jones, saying this is all “politically motivated” and there is “no collusion.”

One possible reason for this phone call to Alex Jones: Stone just gave people the web address for his legal defence fund, saying he needs the money help for his big fight, in which he will not surrender under any circumstances.

Jones loses his connection with Stone’s cellphone. Says there’s an “80% chance” the Deep State was listening in (to a call being broadcast live online) and cut the line https://t.co/vFACMOQJBu

Roger Stone: “I will plead not guilty to these charges. I will defeat them in court. I believe this is a politically motivated investigation… I look forward to being fully and completely vindicated.” https://t.co/GkW782LTF8 pic.twitter.com/SGAjaZFPTj

Longtime Trump associate Roger Stone denies charges against him amid protestors chanting “lock him up!”

“I am falsely accused of making false statements during my testimony to the House Intelligence Committee.” https://t.co/eBroJxnrEM pic.twitter.com/ruBypPI5uM

Previous Pelosi On Stone’s Arrest: Interesting To See The Kind Of People Trump Has Surrounded Himself With [VIDEO]
Next LIVE VIDEO: Trump To Unveil Deal To End Shutdown