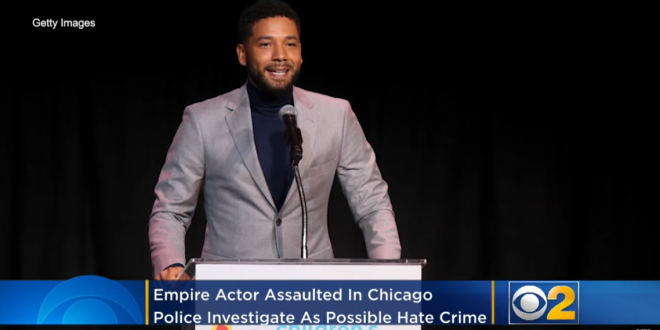 Empire star Jussie Smollett was attacked early this morning in Chicago in what police are saying is a possible hate crime, Deadline has confirmed. Chicago PD released the following statement on Twitter: “Overnight the Chicago Police Department received a report of a possible racially charged assault and battery against a cast member of the television show Empire. Given the severity of the allegations, we are taking this investigation very seriously and treating it as a possible hate crime.”

According to police, the actor was exiting a restaurant in the 300 block of East Lower Water Street when two suspects began yelling racial and homophobic slurs towards him. They then proceeded to attack Smollett, punching him before pouring an unknown chemical substance over him. At some point during the attack, one of the suspects wrapped a rope around Smollett’s neck. The attackers then fled the scene.

Some outlets are claiming that the assailants were wearing MAGA hats but this remains unconfirmed.

NOTE: I typically do not report on alleged hate crimes unless there are witnesses or video – or if an arrest has been made. I’ve made an exception in this case because it involves a prominent person.