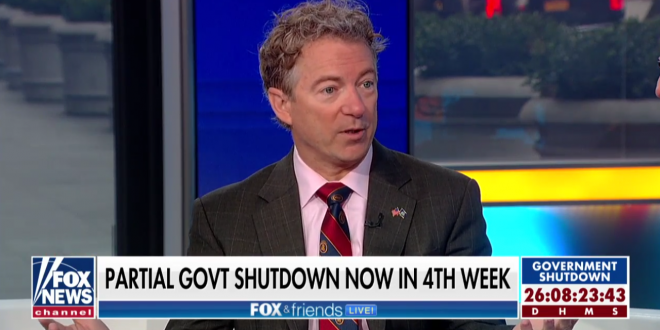 Rand Paul: Pelosi Postponing The SOTU Is An Affront To Americans, Trump Should Just Do It Before The Senate

In response to Speaker of the House Nancy Pelosi’s (D-CA) recommendation that President Donald Trump postpone his State of the Union speech until the government reopens, due to concerns about security, Sen. Rand Paul (R-KY) offered an alternate proposal: ignore the security concerns entirely and just hold the event in the Senate chamber.

Appearing on Fox & Friends on Thursday morning, Paul characterized Pelosi’s recommendation as a “real affront to the American people.”

“What I would suggest is, Senator McConnell is in charge of the Senate — let’s host it in the Senate. First time in history that the House would deny a president the forum of speaking. If she is going to do that, let’s hold it in the Senate,” he said.

Unbelievably, Nancy Pelosi threatened to cancel the State of the Union address for fabricated “security” reasons while simultaneously refusing to open up the government because she doesn’t want security at the border. This only makes sense if you’re a liberal. 🤔