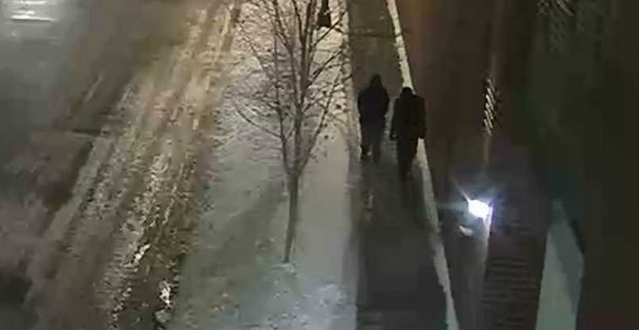 The Chicago Police Department has released two images from surveillance video of “potential persons of interest” in the alleged attack of “Empire” actor Jussie Smollett. Smollett’s music manager also confirmed that he was on the phone with the actor at the time he was attacked in Chicago early on Tuesday morning, and that he heard some of what transpired.

In a follow-up interview with police, Smollett also told investigators that he heard attackers shout “MAGA country.” MAGA stands for Make America Great Again, President Trump’s campaign slogan. Moore told Variety that he heard those words being used. “I heard that clearly. I heard the scuffle and I heard the racial slur,” he said.

On Wednesday, Bobby Rush, the Chicago congressman who introduced H.R. 35, a bill that would make lynching a federal crime, tweeted that he had contacted FBI director Christopher Wray to ask for “an immediate and sweeping civil rights investigation into the racist and homophobic attack” on Smollett.

In a statement, he called the attack “a hate crime plain and simple” and vowed not to “stand by while evil acts are inflicted on any citizen, especially not in my hometown.”

CPD Officer Michael Carroll confirmed to USA TODAY that the FBI is investigating a threatening letter containing a white substance that was sent to Smollett at Fox’s Chicago studios on Jan. 22. The powder was later determined to be acetaminophen, or Tylenol.

A woman who lives in Jussie Smollett’s apartment building told cops she saw a suspicious man — whom she said looked like a “redneck” — loitering just outside the entrance to the building an hour and a half before Jussie says he was attacked.

The woman — who asked us not to use her name — tells TMZ, she walked out of the building at 12:30 AM Tuesday to take her dogs out and saw the man near the door, pacing between the parking garage and entrance, looking agitated and smoking a cigarette. She says, “He looked out of place.”

He was a white man with scruff on his face wearing a blue winter beanie, a blue zip-up sweatshirt with a hood and blue jeans that were too short, exposing “thick, grey hunting socks” with camel-colored dress shoes.

Photos of people of interest who were in area of the alleged assault & battery of Empire cast member. While video does not capture an encounter, detectives are taking this development seriously & wish to question individuals as more cameras are being reviewed pic.twitter.com/xJDDygtocr