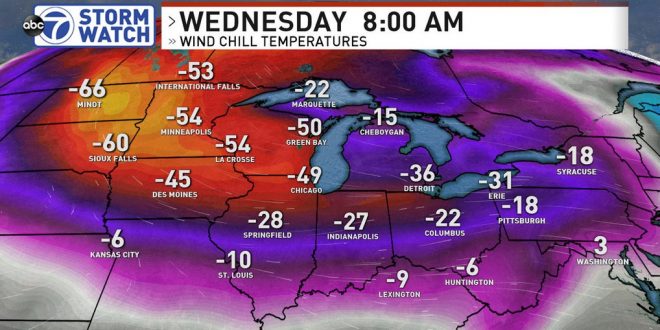 The polar vortex is gripping the Midwest Wednesday with the coldest Arctic air in a generation, forcing widespread school and government office closures, leaving tens of thousands without power, and in a rarity, prompting the U.S. Postal Service to suspend delivery to a widespread swath of the region. The break in the polar vortex brought a wind chill of -66 degrees Fahrenheit in Minnesota overnight and wind chills of -58 degrees Fahrenheit in Wisconsin and Iowa.

Illinois Gov. J.B. Pritzker joined governors in Michigan and Wisconsin to declare a state of emergency. The governor said the State Emergency Operations Center was enacting an emergency preparedness plan, noting that the weather forecast through Thursday could be “potentially historic.” Calling the brutal cold a “public health risk,” Chicago Mayor Rahm Emanuel said city agencies are making sure homeless people are in shelters or offered space in five Chicago Transit Authority buses.

The cold air is riding behind an Arctic front that brought several inches of snow to the same region over the weekend. The pure white ground will enhance the chill, as sunlight reflects off the snow and back to space instead of being absorbed into the ground where it could warm things up. If those conditions line up, they could “easily push” temperatures to minus-35 to minus-39 in Northern Illinois, the National Weather Service said, which would jeopardize if not topple the state’s coldest low.

Emerging research suggests that a warming Arctic is causing changes in the jet stream and pushing polar air down to latitudes that are unaccustomed to them and often unprepared. Hence this week’s atypical chill over large swaths of the Northeast and Midwest. Friederike Otto, an Oxford University climate scientist who studies how specific weather events are exacerbated by global warming, said that while not all of these extreme events can be attributed to climate change, the profound changes in the earth’s atmosphere raise “the likelihood of a large number of extreme events.”

The current wind chill in Chicago is -47°F 🥶

Take a look at this video from ABC News. This aerial footage shows the view of the Chicago River. The area could see a wind chill of 50 below zero today. #cold #PolarVortex2019 pic.twitter.com/6m2wjr7NmA