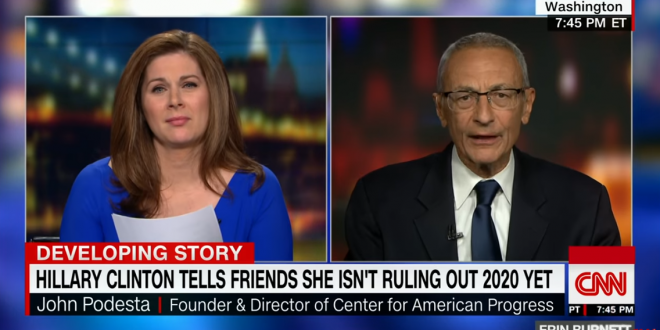 Former Hillary Clinton campaign chairman John Podesta said Tuesday that he takes the former secretary of state at her word that she does not intend to run for president in 2020. “I take her at her word,” Podesta told CNN’s Erin Burnett on “Erin Burnett OutFront.”

“She’s not running for president — we’ve got a lot of great candidates out there right now, and I think the Democratic primary is going to be a spirited one with a lot of great ideas coming forward.”

“I think she would have been a great president but that’s in the past and she said she’s not running,” he added. CNN’s Jeff Zeleny reported Sunday that Clinton is telling people she’s not closing the doors to the idea of a 2020 campaign.

Previous Christie Shreds Jared Kushner’s Father: His Was One Of The Most Disgusting Crimes I Ever Prosecuted [VIDEO]
Next Biden Holds Big Lead In Poll On Dem 2020 Candidates