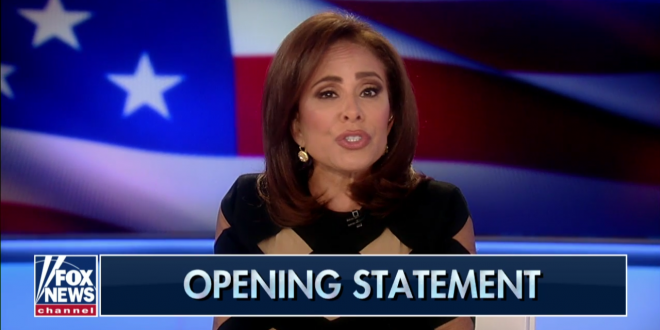 “So let me see if I understand this: An American mother shows a picture of a child murdered by an illegal, and Chuck Schumer and his gang they come out and show pictures of federal employees. Is there a moral equivalency here? Are you folks, schizo? Are you working for Americans or illegals? Or is it that you just don’t give a damn? You vacation in Hawaii.

“Your buddies vacation in Puerto Rico during a shutdown and you plan a jaunt to Europe while federal employees are trying to save every dollar to buy groceries. Admit it — you don’t give a damn. Nancy, you are a hypocrite, a political operative. Your mantra: Destroy the president of the United States. To hell with the taxpaying hard-working Americans. Let them eat cake. I got a junket to go on, an ego to assuage, an electorate to ignore.” – Jeanine Pirro, on last night’s show.

Previous Giuliani Says Maybe Trump Did Talk To Michael Cohen Before Testifying To Congress But “So What?” [VIDEO]
Next Giuliani Changes Timeline On Trump Tower Moscow Talks: Maybe They Continued To Election Day [VIDEO]