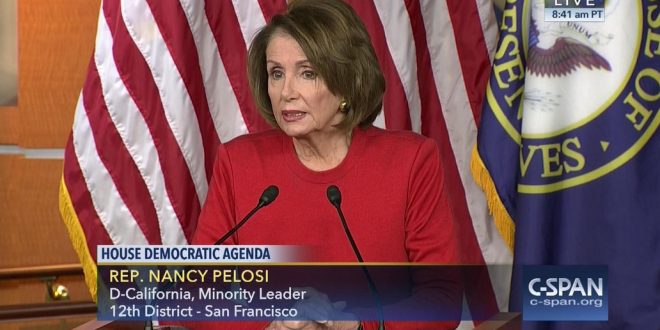 Pelosi’s Message To Trump: “Nothing For The Wall”

Speaker-designate Nancy Pelosi told NBC’s “Today” show in an interview set to air Thursday that she will not provide President Donald Trump with the border wall funding he has demanded and shut down the government over.

Asked by NBC’s Savannah Guthrie if she was willing to give up any money specifically for the border wall, Pelosi said “no.”

“We can go through the back and forth,” Pelosi said in a clip that aired on MSNBC on Wednesday. “No. How many more times can we say no? Nothing for the wall.”

NEW: “We can go through the back and forth. No. How many more times can we say no? Nothing for the wall,” Rep. Pelosi tells @SavannahGuthrie amid the government shutdown, as Democrats prepare to retake control of the House on Thursday. pic.twitter.com/0tOVfmgJft