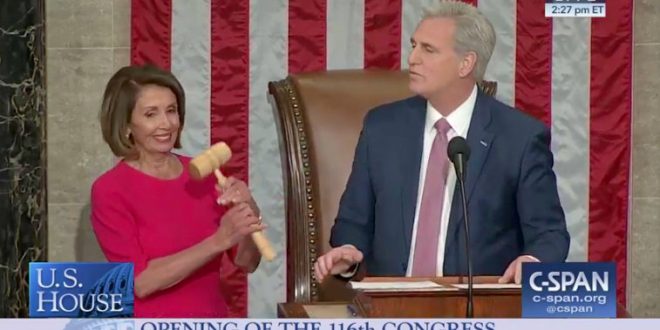 The House of Representatives elected Rep. Nancy Pelosi (D-Calif.) as speaker for a second time on Thursday, the first day of a new, divided Congress that is more likely to confront President Trump.

The 78-year-old California Democrat secured the votes of 220 members out of a total of 430 present. Rep. Kevin McCarthy (Calif.), the top Republican in the chamber, received 192 votes.

Pelosi tamped down a challenge from a group of Democratic rebels clamoring for a generational change in leadership. She took over as the partial government shutdown was in its 13th day, with no end in sight to the dispute over Trump’s demand for billions of dollars for a U.S.-Mexico border wall.

Previous Sen Dianne Feinstein: My Choice For 2020 Is Joe Biden
Next Trump Spiritual Advisor Frank Amedia: The Space Force Is Part Of God’s Divine Plan To Bring Jesus Back