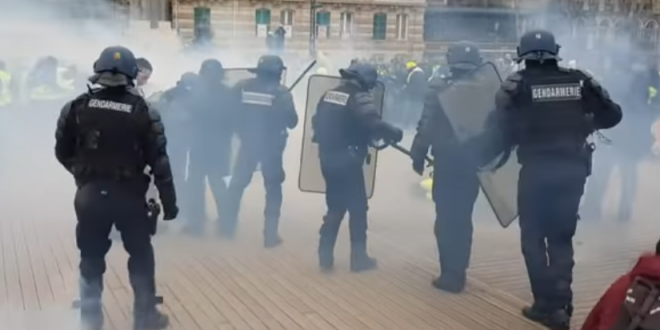 Rioters in Paris torched motorbikes and set barricades ablaze on the upmarket Boulevard Saint Germain on Saturday, as protests against high living costs and the perceived indifference of President Emmanuel Macron turned violent on the fringes.

The latest “yellow vest” marches began peacefully but degenerated in the afternoon as protesters threw missiles at riot police blocking bridges over the Seine.

Officers fired tear gas to prevent protesters crossing the river and reaching the National Assembly. One riverboat restaurant was set ablaze and a policeman was wounded when he was hit by a bicycle hurled from a street above the river bank.

As the French ‘yellow vest’ movement continued on Saturday, with 50,000 protesters marching through Paris and across France according to the French government, president Emmanuel Macron has denounced the “extreme violence” of some clashes that erupted at the Paris march.

These new protests follow Macron’s government announcing on Friday that it would harden its stance against the ‘yellow vests’.

For the past two months, the ‘yellow vests’ or ‘gilets jaunes’ have been blocking roads, occupying highway toll-booths and organising weekly, sometimes violent, marches in Paris. Driving the movement is the feeling among French workers and lower-middle class that they cannot make ends meet, and anger at Macron’s reforms seen as favouring the rich.

Previous Hannity Warns Trump: If You Cave On Wall Funding, The Political Damage For The GOP Will Be Incalculable
Next CHATTER AWAY: Overnight Open Thread