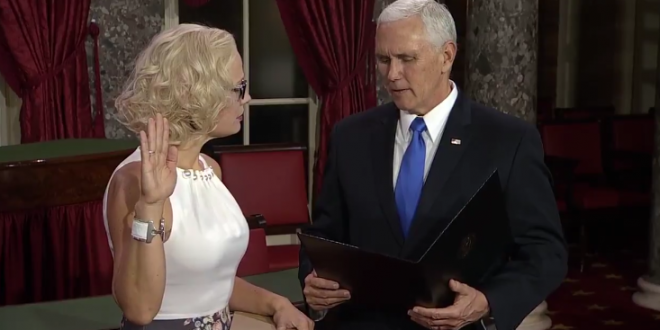 Openly Bi Dem Sen. Kyrsten Simena Took Her Oath On Copy Of US Constitution, Not The Bible [VIDEO]

On Thursday, U.S. Sen. Kyrsten Sinema, a Democrat, took her ceremonial oath of office using a copy of the Constitution rather than a religious book, as most members usually do. Sinema’s move, while legally irrelevant, may only heighten speculation that she is an atheist.

Vice President Mike Pence ended Sinema’s oath with the usual words, “so help you God?” Sinema responded, “I do.” Afterward, he noted that he looked forward to working with her in the Senate.

Officially, Sinema identifies herself as religiously unaffiliated, and is the only member of the House or Senate to do so, according to the Pew Research Center for Religion and Public Life.

Homophobe Mike Pence had to swear in Kyrsten Sinema, the first out bisexual Senator in history, on a law book and not a bible. He seems uncomfortable and she’s having fun with it. This is everything. pic.twitter.com/1VxBsK1l0u