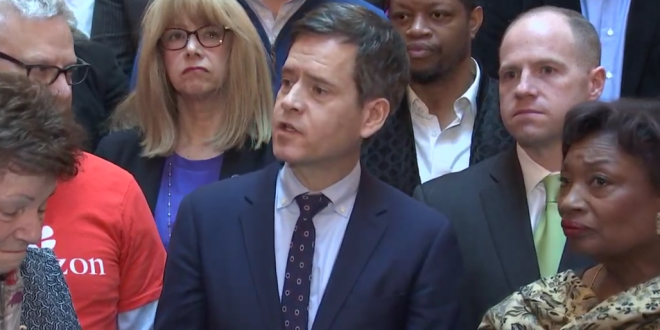 The New York State Senate passed a series of historic reforms Monday that will allow victims of child sexual abuse to seek justice through the court system once they become adults. The Senate unanimously passed the long-awaited Child Victims Act as victims of priests from the Diocese of Buffalo and other institutions looked on.

Victims of child sexual abuse will have until age 55 to file civil charges against the perpetrators or the institutions that were responsible. The law would apply to private schools or organizations like churches and also to public schools. Criminally, the statutes will be raised from 23 to 28.

The law also puts into place a one-year “look-back window” which would suspend all statutes of limitation in civil cases for one year, allowing throngs of victims who were abused while the old law was in effect to come forward and file civil lawsuits today. The Catholic Church had strongly opposed that measure and New York’s bishops spent nearly $2 million lobbying against bill.

While the bill has repeatedly passed in the Assembly in recent years, the previously Republican-controlled State Senate had blocked the legislation from getting a vote. On Monday, the bill passed the Democratic-controlled chamber unanimously.

“I have to ask the question, as I explain my vote: What took you so long?” wondered State Sen. Brad Hoylman, the bill’s sponsor, through tears. “The Senate postponed a reckoning and buried this legislation.”

Newly-elected State Senators Alexis Biaggi and Rachel May also gave emotional testimony in support of the bill, sharing that they themselves had been victims of sexual abuse. “The acts of terror that you have endured does not make you less human,” said Sen. Biaggi.

Hoylman, not incidentally, is openly gay.

Survivors of child sexual abuse, what happened to you was real and you deserve justice. The State of New York and the force of its law is behind you, and you will not be turned away. pic.twitter.com/gPkiqzqGo3

Today the #ChildVictimsAct will pass in both the NYS Assembly and Senate. After 13 years of advocacy and pain, justice will finally be attainable for survivors of child sexual abuse. #NYCVAToday pic.twitter.com/dMbiCzBMQ6

I am proud to be voting for the #ChildVictimsAct, which ensures that people who have survived childhood sexual abuses are able to exercise the human right to seek justice. pic.twitter.com/RvCMfwpbpt

So far, three lawmakers today — Sen. Alessandra Biaggi, Assemblywoman Yuh-Line Niou and Assemblywoman Catalina Cruz — said they are survivors of sexual abuse during the debate over the Child Victims Act