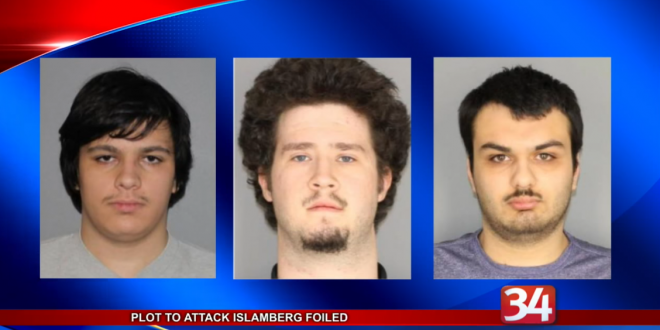 A seemingly offhand remark in a high school lunchroom set off an investigation that uncovered an arsenal of weapons and a plot to attack a Muslim enclave in upstate New York, law enforcement officials said. The comment was made by a 16-year-old student at Greece Odyssey Academy in Greece, N.Y.

On Friday, he showed classmates a photo of someone and said that person looked like a potential school shooter, authorities said. The statement alarmed fellow students, who reported it to school officials. The local police became involved and started interviewing people at the school to determine whether there was a potential threat.

The threat, it turned out, came from the 16-year-old whose comments had triggered the investigation, authorities said on Tuesday. He and three young adults stockpiled 23 firearms and three homemade bombs as part of a plan to target the secluded Muslim enclave of Islamberg, a rural settlement about 150 miles northwest of New York City, authorities said.

Brian F. Colaneri, 20, of Gates, Vincent R. Vetromile, 19, of Greece and Andrew C. Crysel, 18, of East Rochester were arrested on Saturday. All three have been charged with three counts of first-degree criminal possession of a dangerous weapon and one count of fourth-degree conspiracy. All are felonies.

A 16-year-old suspect — the same Greece Odyssey student who showed off the picture that initiated the investigation — was also arrested and faces the same charges as the men. Due to the state’s new Raise the Age legislation, the 16-year-old is being prosecuted as an adolescent offender.

The three men are being held in the Monroe County Jail on $50,000 bail or $100,000 bond. The 16-year-old has been arraigned and is being held on $1 million bail. There are due back in Greece Town Court at 11 a.m. Wednesday for a preliminary hearing.

Watch the second clip below.