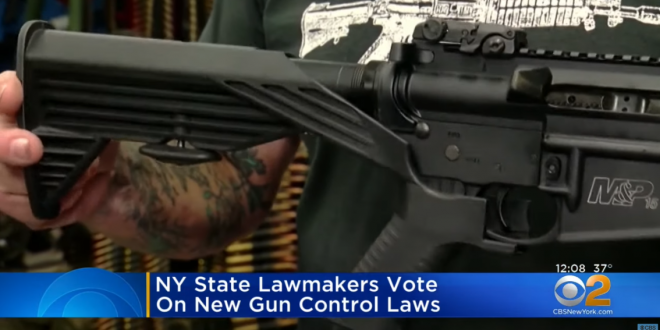 New York lawmakers on Tuesday approved the most comprehensive set of gun bills in the state in six years, including measures that would ban bump stocks, prohibit teachers from carrying guns in schools and extend the waiting period for gun buyers who do not pass an instant background check. In total, six gun bills passed easily through the State Senate and Assembly, a remarkable sight in a Capitol that for years had resisted almost all new legislation on the subject.

The last group of reforms include illegal firearms and modifications. The legislature banned the “possession, manufacture, transport and disposition of rapid-fire modification devices.”

These include devices such as bump stocks, trigger cranks, and other modifications allowing for rapid fire of ammunition. This adjusted the current law which only prohibited the attachment of the devices to firearms not the sale or possession of the devices themselves.

The second part of the legislation involving illegal firearms creates a buyback program allowing individuals to voluntarily turn in their illegal firearms without being punished for possession and receive a cash reward.