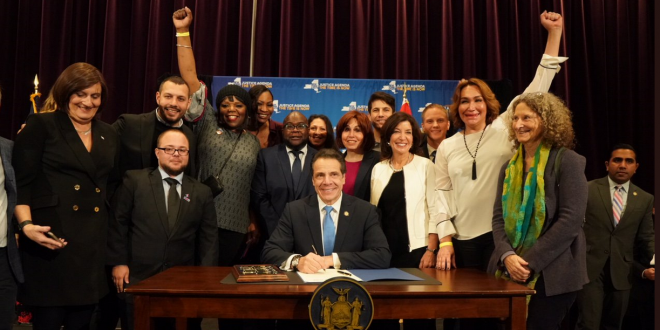 Cuomo signed the bills at the LGBT Community Center in Manhattan 10 days after they were swiftly approved by the State Legislature. The two measures sailed through the Assembly and State Senate in the beginning of the legislative session after years of stalled action while the Republicans controlled the upper house.

GENDA, which adds gender identity and expression as a protected class in the state’s human rights and hate crimes laws, was long stalled, winning only Assembly passage, after advocates called on the state to take further action in light of the limited scope of the 2002 Sexual Orientation Nondiscrimination Act, which only protected people on the basis of sexual orientation.

At a time when the Trump administration and Republicans continue to roll back protections for LGBTQ people, Democratic governors and state legislatures are stepping up. After decades of advocacy and hard work by organizers, LGBTQ New Yorkers will now be equally protected under the law.

All Americans should have equal opportunity to thrive in every aspect of their lives without fear of harassment or discrimination. Now, it is finally clear that in New York, transgender and gender non-conforming individuals cannot be discriminated against in education, housing, credit, employment, public accommodations, or hate crime prosecutions.

Further, LGBTQ youth can no longer be subjected to the abusive and inhumane practice of ‘conversion therapy,’ which has been denounced by mental health professionals across the country.

Thanks to the the leadership of Governor Cuomo and New York Democrats, New York continues to lead in LGBTQ rights. This legislation should serve as a model for other states to follow and a reminder that all Americans, regardless of who they love or how they identify, deserve to be treated equally and live free from discrimination.

We made history today. pic.twitter.com/YQ99fJAZtv

Previous Nancy Pelosi: The SOTU Will Happen When I Say It Will
Next FILING: Mueller Feared Stone Would Flee, Hence Raid