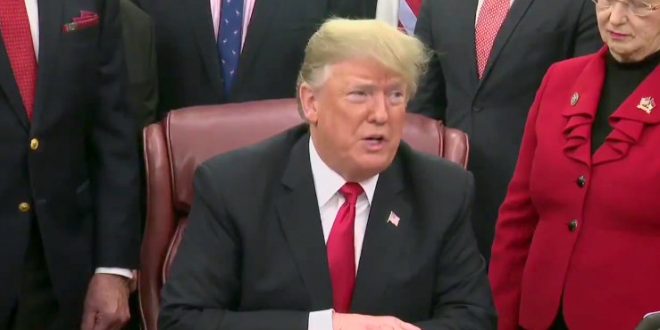 President Trump announced on Monday that he would address the nation from the Oval Office on Tuesday evening to discuss what he called the crisis at the southern border, and the White House said that later in the week he would travel to the border as part of his effort to persuade Americans of the need for a wall — the sticking point in negotiations with Democrats which caused a government shutdown.

It was not immediately clear which outlets would carry his address. The four major broadcast networks — ABC, CBS, FOX and NBC — confirmed receiving the White House request on Monday for Mr. Trump to speak during the 9 p.m. Eastern Standard Time slot, but producers had not decided whether to grant him the time. Pre-empting prime-time coverage is an expensive proposition for television executives, who have sold millions of dollars’ worth of advertising against entertainment programming.

I am pleased to inform you that I will Address the Nation on the Humanitarian and National Security crisis on our Southern Border. Tuesday night at 9:00 P.M. Eastern.

I'm waiting to hear back from ABC, CBS, NBC, and Fox broadcast about whether they will carry Trump's prime time address tomorrow night. The networks don't automatically say yes when a president asks for airtime.