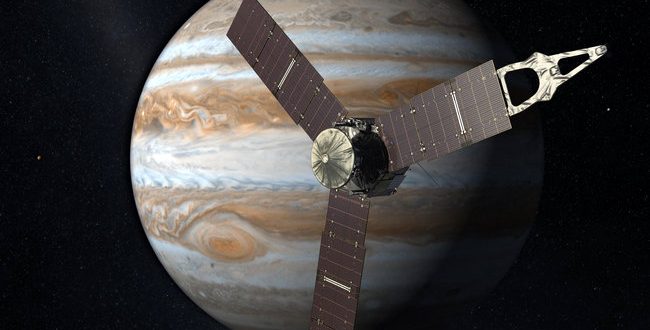 NASA’s Juno orbiter has captured images of a volcanic plume on Jupiter’s moon Io during the mission’s 17th flyby of the giant planet.

Four instruments onboard Juno — a camera called JunoCam, the Stellar Reference Unit, the Jovian Infrared Auroral Mapper and the Ultraviolet Imaging Spectrograph — observed Io for over an hour, providing a glimpse of the moon’s polar regions as well as evidence of an active eruption.

“We knew we were breaking new ground with a multispectral campaign to view Io’s polar region, but no one expected we would get so lucky as to see an active volcanic plume shooting material off the moon’s surface,” Scott Bolton, principal investigator of the Juno mission. “This is quite a New Year’s present, showing us that Juno has the ability to clearly see plumes.”

Previous Pope Blasts US Bishops Over Abuse Crisis: Your Finger Pointing Is Damaging The Credibility Of The Church
Next BENGHAZEED: Trey Gowdy Swears Off Politics Forever