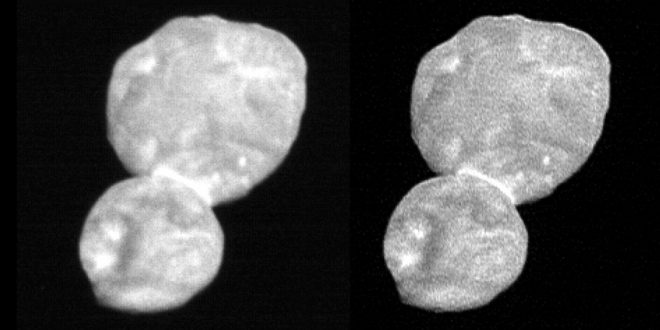 Ultima Thule, an icy world 4 billion miles from the sun, looks like a big snowman. At a news conference on Wednesday, scientists working with NASA’s New Horizons mission released several images that the spacecraft took as it flew by on Jan. 1.

The scientists now say with confidence that Ultima Thule long ago was two bodies that got stuck together, what they call a contact binary. “Two completely separate objects that are now joined together,” said S. Alan Stern, the principal investigator for the mission.

In the early hours of New Year’s Day, @NASANewHorizons flew past #UltimaThule, an object located in a region of primordial objects 1 billion miles past Pluto. Join us live from @JHUAPL today at 2pm ET as we explore the latest science from the spacecraft: https://t.co/oJKHgKpQjH pic.twitter.com/6IMiS0XGNt

The image taken by @NASANewHorizons – shown in its original version (left) & sharpened version (on right) – is the most detailed image of the farthest object ever explored by a spacecraft. https://t.co/gItPsMvbPC @NASA pic.twitter.com/i7rDBURNrw