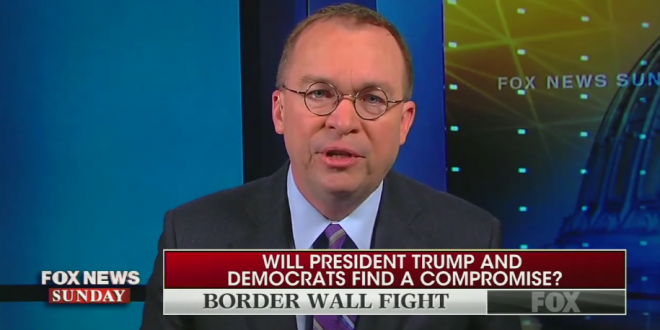 Mick Mulvaney: Trump Caved Because He Was Winning

“Why he did what he did was because many Democrats had come to us, some of them privately, many of them spoke out publicly, that they are actually starting to agree with him on the necessity for a barrier on the southern border, and they had come to us and said, ‘Look, we agree with you, you’re winning the battle on the importance of a barrier on the southern border, but we simply cannot work with you while the government is closed.'” – Mick Mulvaney, on Fox News Sunday.

Acting chief of staff Mick Mulvaney maintained Sunday that President Donald Trump will use his executive authority to get funding for a wall on the southern border if he doesn’t get it through Congress.

Mulvaney, speaking on “Fox News Sunday” two days after Trump agreed to reopen the federal government despite not receiving any money for his wall, also suggested that Trump, for now, is sticking to his request for $5.7 billion.

“This is not something where he’s married to a number,” Mulvaney said on Fox when asked about the $5.7B for wall. He refused to say if Trump would take less than $5.7 billion.

Chief of Staff Mick Mulvaney Claims Trump Caved on Wall Because He Was ‘Winning’ https://t.co/ne9b31Cpjj pic.twitter.com/ILW7CAxoBk