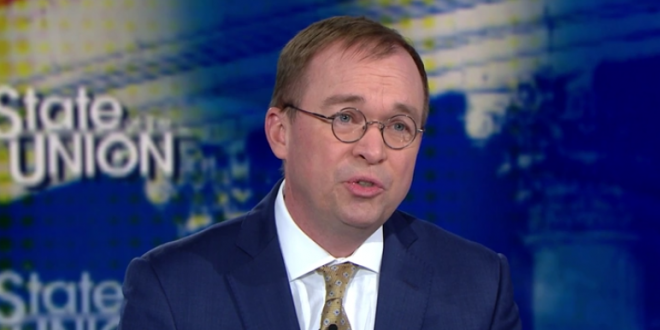 Acting White House chief of staff Mick Mulvaney said Sunday that although President Trump uses coarse language at times, he is not to blame for “coarsening” public discourse.

“I don’t think anybody in the country blames the president,” he told CNN’s “State of the Union.” “I think there’s more important things than who is coarsening the language.”

After CNN played a montage of Trump’s use of colorful language in public speeches, Mulvaney also noted that “the president does use coarse language in private with us.”

“The President does use coarse language in private a lot with us. … But no, I don’t think anybody blames the President of the coarsening of the language,” acting White House chief of staff Mick Mulvaney says #CNNSOTU pic.twitter.com/OqZWhQyIuG