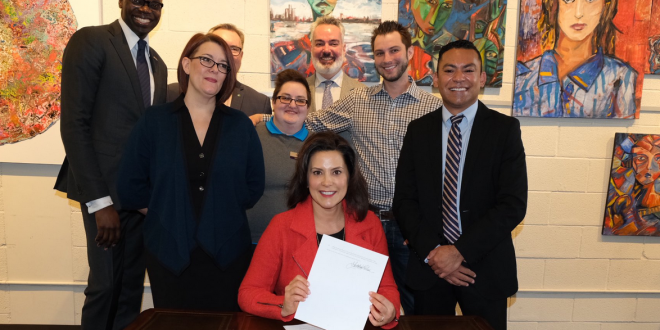 Democratic Gov. Gretchen Whitmer on Monday signed a new directive to prohibit LGBT-based discrimination in state services or by state contractors, replacing a narrower order that her Republican predecessor issued days before he left office.

Whitmer’s directive, like one signed by Gov. Rick Snyder in late December, says state contracts, grants and loans must include a requirement that the contractor or recipients not discriminate against workers or job applicants — including by considering their “sex,” which the Michigan Civil Rights Commission last year interpreted in the state’s civil rights law to include sexual orientation and gender identity.

Her order, unlike Snyder’s, does not include an exemption for religious organizations that receive state money.

“This action is deeply personal to me and I am grateful that Gov. Whitmer has made anti-discrimination one of her top priorities in her first several days in office,” Nessel said. “This is a step in the right direction and I am hopeful that soon our state laws will also reflect the paradigm of equal protection under the law for all Michiganders.”

David Maluchnik, a spokesman for the Michigan Catholic Conference, said the group wants to study the directive before commenting. “We were looking forward to the governor coming out of the gate on issues related to poverty, clean water or criminal justice reform,” he said.

BREAKING: Governor Whitmer has signed an Executive Directive that prohibits the state government from discriminating against the LGBTI community 🏳️‍🌈

Thank you @gretchenwhitmer, this ED makes clear that LGBT people are to be treated fairly and with equal dignity. pic.twitter.com/PR7cPRVuJs

Today at @GoAffirmations in Ferndale, I signed ED 2019-9 focused on strengthening non-discrimination in state employment, contracting, and services. This includes prohibiting discrimination based on sexual orientation and gender identity or expression. pic.twitter.com/BP8pBSMGLy