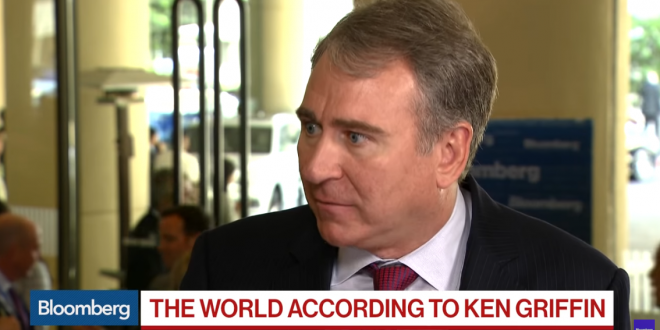 Billionaire Ken Griffin, who is becoming almost as known for his prodigious purchases as he is for his investment acumen, has closed on a New York penthouse for roughly $238 million. The deal sets a record for the highest-priced home ever sold in the U.S. The purchase is the latest in a string of record-breaking acquisitions by the Citadel hedge fund founder. Earlier this year, Mr. Griffin bought several floors of a Chicago condominium for $58.75 million, setting a record for the most expensive home ever bought in that city.

He snapped up a penthouse in Miami Beach’s Faena House in 2015 for $60 million, setting the record for a Miami condo. Since 2012, Mr. Griffin has spent close to $250 million assembling land to build a mansion in Palm Beach, Fla., according to public records. And earlier this month, he acquired a London home for about $122 million in one of the priciest deals ever done in that city, according to people familiar with that deal.

Billionaire Ken Griffin closes on a $238 million New York penthouse, now the most expensive home ever sold in the United States https://t.co/bR0RQV6zkX pic.twitter.com/fv81TQr0yg

Now the most expensive home in America – a penthouse atop a new tower bordering Central Park in #Manhattan . Apartment is 4 stories, 23,000-square-feet, $238 million. 50-yr-old buyer is worth $8.7B & this isn’t his primary home.https://t.co/NqY5Eos9aF
and https://t.co/jL8QQYSMZk https://t.co/G28ogKUhwh