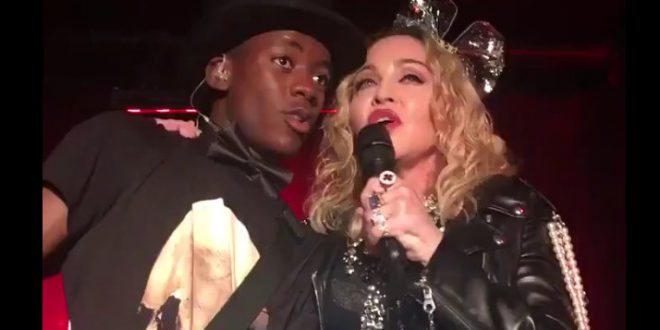 People expected something a week ago when Stonewall Inn — the bar in New York’s Greenwich Village where the riots that kicked off the modern LGBTQ movement took place in 1969 — announced that Madonna had been named an ambassador for the 50th anniversary celebrations. However, they may not have expected it quite so soon.

On New Year’s Eve, word leaked out that Madonna would be making an appearance, and not long after midnight, she did, giving a speech and then performing two songs accompanied by David Banda (her adopted 13-year-old son) on acoustic guitar.

Prior to her performance, which included “Like a Prayer” and a rendition of Elvis Presley’s 1961 hit “Can’t Help Falling in Love,” she delivered a speech reflecting on the LGBTQ movement and a hopeful look to the future.

@Madonna, activist and friend, gave a surprise performance at stonewall. And she was everything you imagined to be. ❤ #ally #hiv #UEqualsU #madonna pic.twitter.com/Y7p5fffWdi

Previous Obama: We’ve Got A Lot Of Work To Do In 2019
Next AUSTRIA: Same-Sex Marriage Ruling Goes Into Effect