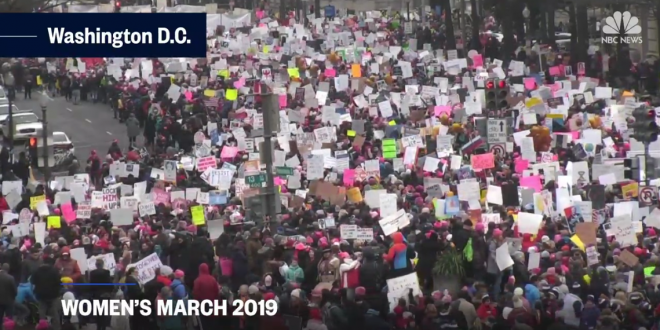 Battling internal power struggles, including accusations of anti-Semitism, the Women’s March that roared onto the political scene following the election of Donald Trump as president is hitting the streets of Washington Saturday, joined by “sister marches” in hundreds of other U.S. cities. But a cause that in 2017 drew 3.3 million to 5.2 million nationwide – making it likely the largest demonstration in U.S. history – now may be lucky to attract half that many.

Demonstrations and rallies are scheduled in Washington and at some 350 sites nationwide to display opposition to Trump, to demand an end to violence against women and to push for equality. Marches are planned across the country, from Boston, to Los Angeles, to Dallas, Houston, Nashville, and in smaller cities like Burlington, Vermont., and Grand Junction, Colorado.

Today is the day. People have already started to arrive.The #WomensWave is HERE.

Great turn out today. Happy to be standing for equality #WeAreChange #WomensMarch2019 pic.twitter.com/E6UIFdAc85