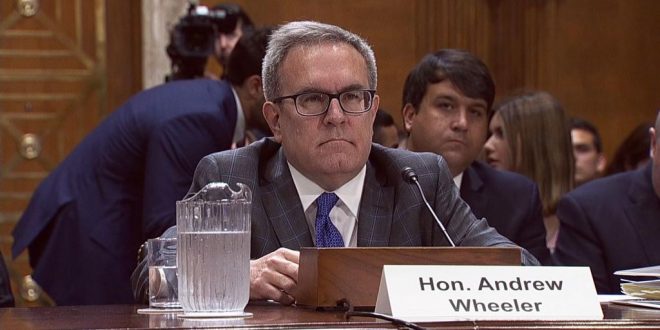 A rollback of mercury emissions standards. A revamp of clean water regulations. A retreat from a climate change agenda. Democrats have seethed as they helplessly watched the Trump administration undo or block a slew of Obama-era environmental proposals during the past two years.

On Wednesday, they will get a chance to grill President Donald Trump’s point person on deregulation when Andrew Wheeler goes to Capitol Hill for his confirmation hearing to be the next permanent administrator of the Environmental Protection Agency.

In 30 min, moms & kids will be watching @EPAAWheeler’s nomination hearing to head EPA.

Kids will be in the room to remind Senators of EPA’s mission & who the agency is supposed to protect—based on his actions so far, we can’t trust Wheeler to protect kids’ health. #StopWheeler pic.twitter.com/aXy0C1W7uu

Who’s the guy who might replace Scott Pruitt at the EPA? Former coal lobbyist Andrew Wheeler, who may have violated his ethics pledge by attending meetings and events where his former clients were present, and by working on power plant regulations https://t.co/G4saoZlxNC

Previous Roku Reverses On Adding Infowars After Backlash
Next Pelosi To Trump: Delay SOTU Until Shutdown Is Over