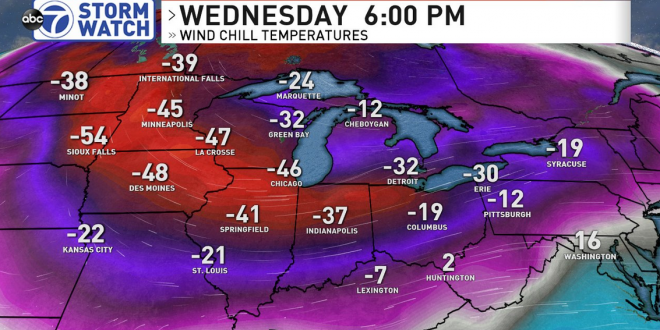 The coldest weather in years will put millions of people and animals throughout the midwestern United States at risk for hypothermia and frostbite to occur in minutes during the final days of January.

On Tuesday night, widespread lows under 30 below zero will grip much of North Dakota, eastern South Dakota and Minnesota. Temperatures in Chicago can drop to 25 below zero for the first time since the mid-1980s.

Residents should ensure that they have a proper amount of propane, wood pellets and/or firewood to last during this cold outbreak. A life-threatening situation can arise in homes that lose heat. Motorists should travel with a winter survival kit in the event their vehicle breaks down and are then forced to wait for help.

The National Weather Service in Des Moines, Iowa, warned that “this is the coldest air many of us will have ever experienced” and, if outside, “avoid taking deep breaths, and minimize talking.”

In Chicago, wind chills as low as 55 below zero are “likely” midweek, the weather service said. Some areas in the northern Plains could see wind chills of 64 degrees below zero.

“Some locations in the Midwest will be below zero continuously for 48-72 hours,” according to meteorologist Mike Doll. “I cannot stress how dangerously cold it will be,” he said. “An entire generation has gone by without experiencing this type of cold.”

The polar vortex was also leading to emergency preparations and school cancellations in the South, where temperatures were expected to be decidedly less polar but where residents are less accustomed to dealing with the cold.

Officials appeared the most unnerved in Georgia, which will host the Super Bowl on Sunday. Gov. Brian P. Kemp said state offices would be closed on Tuesday in 35 counties, including some in the Atlanta area, as the state prepared for ice and up to two inches of snow.

Previous Ann Coulter Poses A Riddle: How Do You Break Newt Gingrich’s Nose? “By Kicking Donald Trump In The Ass”
Next Trump Is “Very Pissed Off” About Latest WH Tell-All