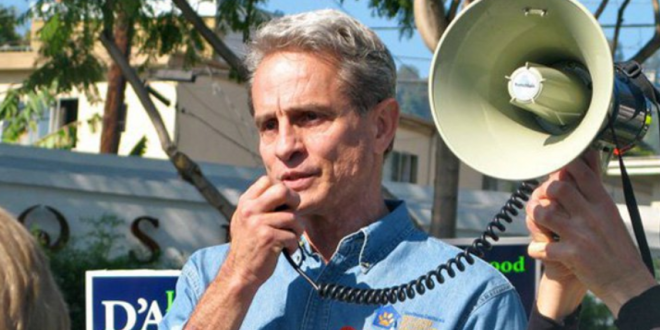 A man was found dead early Monday morning at the same West Hollywood apartment of prominent Democratic Party donor Edward Buck where another man died of a drug overdose about 18 months ago.

Los Angeles County Sheriff’s deputies responded to the apartment in the 1200 block of Laurel Avenue just after 1 a.m. where they found the victim not breathing. Paramedics conducted CPR on the victim, but he died at the scene. His name was not released.

Edward Buck, who is in his 60s, was home at the time. Community activists unleashed their fury outside Buck’s apartment building Monday night. “If this was a black man and there were two white bodies found in his apartment, there is no way he would not be in the jail right now lawyering up,” victims’ rights advocate Tyson-Lord Gray said.

Neil Broverman reports at The Advocate:

Buck, a white man in his 60s, was investigated previously by authorities after the death of Gemmel Moore, who died of a methamphetamine overdose in Buck’s home in July 2017. Since Moore’s death was classified as an accidental overdose, numerous young black gay men have alleged that Buck has a fetish for shooting drugs into black men he picks up off the street or on hookup sites. Moore had written about Buck injecting him with dangerous drugs before his death.

“I’ve become addicted to drugs and the worst one at that,” Moore wrote in his journal in December 2016. “Ed Buck is the one to thank. He gave me my first injection of crystal meth.” Buck claims he’s not responsible for Moore’s death and did not furnish him with drugs. The Los Angeles County District Attorney declined to file charges against Buck, saying there was “insufficient evidence.”

Buck was present for the deaths of both men, the Sheriff’s Department said Monday. Buck’s attorney, Seymour Amster, said Buck was not arrested and is cooperating with investigators.

“From what I know, it was an old friend who died of an accidental overdose, and unfortunately, we believe that the substance was ingested at some place other than the apartment,” Amster said. “The person came over intoxicated.”

Sheriff’s homicide investigators are “conducting a thorough investigation” of the most recent death and will do “follow-up interviews and a secondary review” of Moore’s death, the department said.

"If this was a black man and there were two white bodies found… he would be in jail…" Activists and victim's rights advocates demand justice after a second African American man died inside the home of Democratic donor and activist, Ed Buck @CBSLA https://t.co/CE5MtTCYdr

As you might expect, right wing sites are having a field day with the story, running images of Buck with prominent Democrats including Hillary Clinton, Rep. Ted Lieu, and Rep. Adam Schiff.