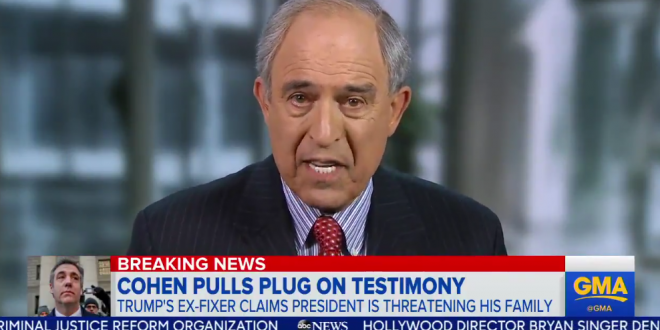 “Calling out a man’s father-in-law and wife in order to intimidate the witness is not fair game and it needs to be investigated,” Davis told ABC News’ chief anchor George Stephanopoulos in an interview Thursday on “Good Morning America.”

Davis was referring to Giuliani’s remarks during an appearance last Sunday on CNN, in which President Donald Trump’s personal attorney said that Cohen’s father-in-law, “a Ukrainian,” “may have ties to something called organized crime.”

Michael Cohen’s lawyer to @GStephanopoulos: “Michael Cohen will speak. They will not thwart this truth coming out.” https://t.co/Nv5upQRMAI pic.twitter.com/eD0GnOnpv3

Davis wants a resolution of censure by the House against Trump for obstruction of justice, calls for a criminal investigation of Rudy Giuliani. Via ABC pic.twitter.com/CxjzI4qSTv

Previous Man Worth $700 Million “Doesn’t Quite Understand” Why Unpaid Federal Workers Are Using Food Banks
Next Aviation Unions Issue Dire Shutdown Warning: There’s No Telling When The Entire System Might Break Down