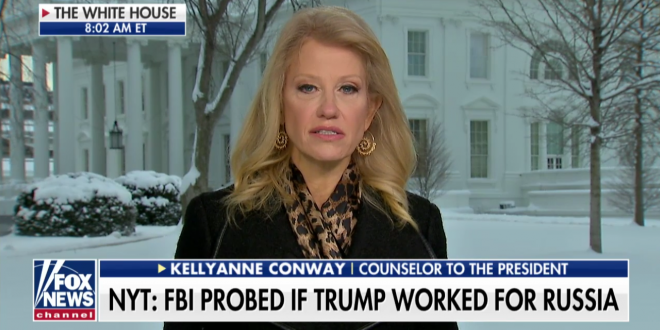 Kellyanne Conway, a senior adviser to Donald Trump, says the president shielded a conversation with Russian President Vladimir Putin in 2017, because his administration was ‘suffering from a great number’ of leaks at that time.

‘His calls with the leaders of Mexico and Australia had leaked, he had an Oval Office meeting in May of 2017, contents of that leaked. And so there was great concern at the time,’ she said.

On report Pres seized US interpreter’s notes of his 2017 Hamburg meeting with Pres Putin, @KellyannePolls says @POTUS “was suffering from a great number of leaks,” citing phone calls with Mexican & Australian leaders. But says she hadn’t spoken to @POTUS about the Putin notes. pic.twitter.com/A8JpeO8Eof

@WhiteHouse doesnt seem to be denying that @realdonaldtrump confiscated interpreters notes from Putin conversation. @KellyannePolls says she hasnt talked with POTUS directly about it, but suggests part of the reason may have been #leaks of information around the time of the G-20.