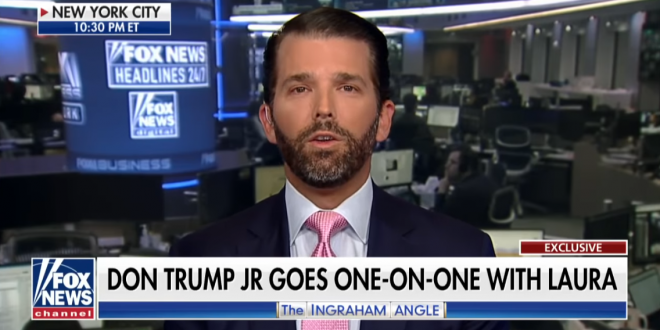 Donald Trump Jr. placed the blame for a Trump Tower Moscow project solely on President Trump’s former attorney Michael Cohen in an interview on Fox News’ “The Ingraham Angle” Monday night, saying, “We don’t know anything about it.”

Trump Jr.’s statement contradicts multiple facts that have already been made public about the Moscow project — mentioned publicly in a 2013 Trump tweet — which was formalized in a letter of intent signed by Trump in October 2015 with a team of developers first revealed in 2017.

“They have shot themselves in the foot time and time again, because they so desperately want this to be the truth, as opposed to saying, ‘You know what? Trump’s done a darn good job as president,’” Trump Jr. said.

Previous CHATTER AWAY: Overnight Open Thread
Next Rudy Giuliani: I’m Afraid “He Lied For Trump” Will Be On My Gravestone, But If So, What Do I Care, I’ll Be Dead