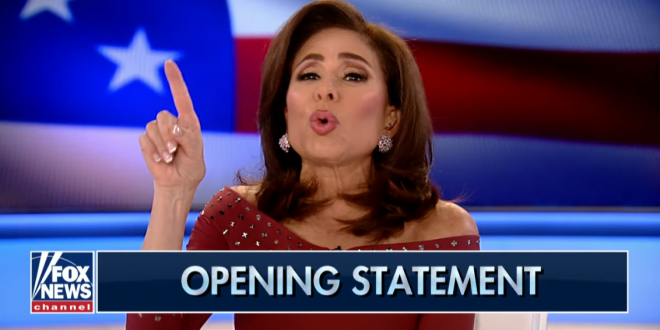 Jeanine Pirro: It’s A Crime That CNN Was Tipped Off To FBI’s “Gestapo” Raid On Roger Stone’s Home [VIDEO]

“Instead of notifying the attorney and requesting he bring his client in for arraignment — standard protocol in cases like Stone’s — the Mueller team decides on Gestapo tactics. Seventeen vehicles including armors trucks, lights flashing, a bullhorn. They begin to banging on Stone’s home, yelling, ‘FBI — open the door.’ The only people home were Stone, his wife, and their dogs.

“And lo and behold CNN is there with cameras in tow, waiting for the FBI for an hour waiting for to it starts. Now, why would they be there? Especially when the FBI considers this dangerous enough to have SWAT teams and guns drawn. Why were you there in position?

“Unusual grand jury activity? Hey, Grand juries meet in secret. What do you know about the activity of the grand jury. What do you know about when they meet or if their schedules change? Does all unusual grand jury activity suggest indictments are being handed up? Admit it. You had a call from them. You are not kidding anybody. It’s a crime for whomever alerted you to alert you. Although, I suspect Mueller won’t give a damn.” – Jeanine Pirro, last night.

How CNN captured video of the Roger Stone raid:

“The product of good instincts, some key clues, more than a year of observing comings at the DC federal courthouse and the special counsel’s office — and a little luck on the timing.”https://t.co/qZ8WLirXSV

Stone lying to congress? Dear Hillary…She lies every time she opens her mouth. The only reason Abedin, Mills, Pagliano are not charged with process crimes is because Comey– who should be indicted himself — never bothered to investigate. God help America. pic.twitter.com/aTeynD7jmR