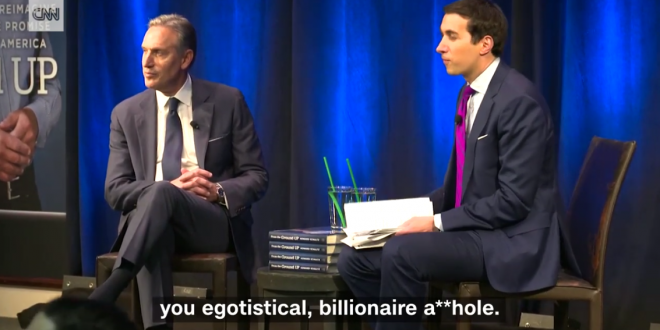 A day after Howard Schultz said he might run for U.S. president, a heckler shouted “don’t help elect Trump” at the former Starbucks CEO, voicing concerns that his independent bid could help President Donald Trump win re-election in 2020.

“Don’t help elect Trump, you egotistical, billionaire, asshole,” shouted the heckler at a Schultz book promotion in New York City on Monday. “Go back to Davos with the rest of the billionaire elite who think they know how to run the world,” the heckler added, before being pulled aside by security.

“If I decide to run for president as an independent, I will believe, and have the courage and conviction to believe, that I can win,” Schultz said. “I’m certainly not going to do anything to put Donald Trump back in the oval office.”