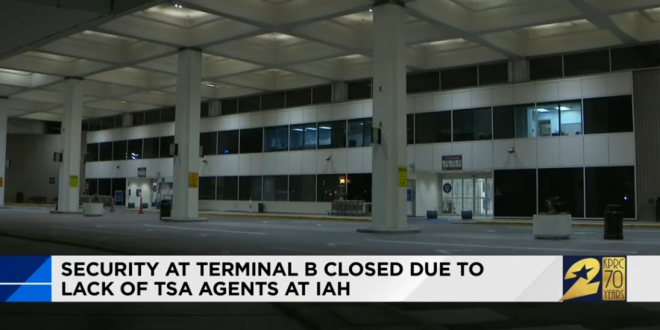 The ticketing and security checkpoint at George Bush Intercontinental Airport’s Terminal B remained closed Monday because of a shortage of TSA workers, who are not being paid during the government shutdown.

A Houston police officer could be seen blocking the ramp to the passenger drop-off area of Terminal B early Monday morning.

There have been reports across the country of TSA workers calling out sick during the shutdown, which has strained operations at some airports. These workers are among those government employees who are required to work without a paycheck during a shutdown.

Terminal B security checkpoint remains closed this AM. Passengers w/ flights out of Terminal B will need to check in, and be screened at Terminal C or E. Please arrive early to allow plenty of time for this change. More info at: https://t.co/1ufWu0a111