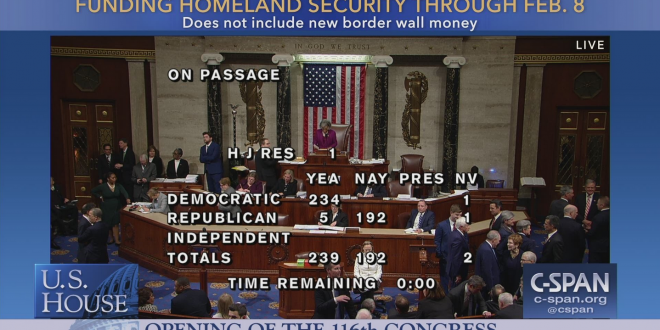 As a result, the legislation is expected to be dead on arrival in the Senate, leaving congressional Democrats and the administration at a stalemate that threatens to prolong the shutdown, which is wrapping up its second week.

The House of Representatives first voted on Thursday to approve a stopgap spending bill for the Department of Homeland Security that would not allocate any new wall funding, in a rebuke to the President. The bill passed by 239-192, with five Republicans joining Democrats.

The five House Rs who broke with Trump and voted to reopen DHS til February 8: Hurd, Smith of New Jersey, Fitzpatrick, Katko, Stefanik

The House passed two bills Thursday night to end the shutdown, with a handful of Republicans joining Democrats.

McConnell says he won’t take them up because they can’t pass the Senate two weeks after similar legislation passed the Senate unanimously.https://t.co/spPzeomoQ4

Here’s what we did on our first day:

✓ Voted to reopen the government.
✓ Swore in most diverse Congress ever.

Here’s what we’re doing next:

The House has passed two bills to fully open the government. Now the Senate should pass them immediately. Many Senate Republicans have already voted for these funding levels but McConnell so far refuses to allow a vote. Tell him to stop bowing to Trump and let democracy work!