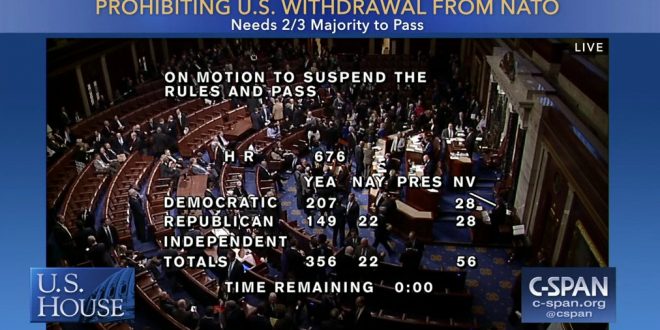 The U.S. House passed legislation Tuesday evening that seeks to bar President Donald Trump from withdrawing from NATO amid renewed concerns over his commitment to the 29-nation military pact.

In a bipartisan 357-22 vote, the Democrat-led lower chamber sent the Senate the NATO Support Act, which would prohibit the use of federal funds to withdraw from the 70-year-old alliance.

Beyond asserting Congress’s power of the purse, it affirms support for NATO and its mutual defense clause, the goal of each member spending at least 2 percent of its gross domestic product on defense by 2024, Montenegro’s accession and “robust” U.S. funding for the European Deterrence Initiative, among other provisions.