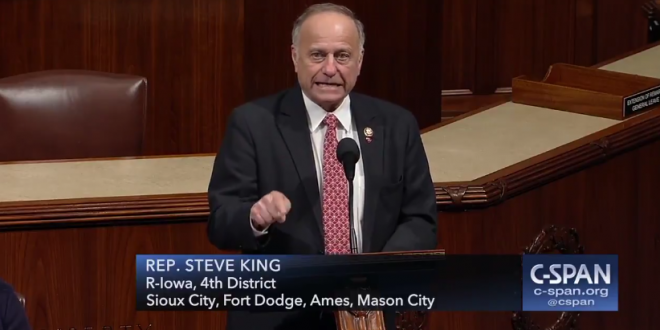 From a letter signed by multiple hate group leaders:

Dear Leader McCarthy, We are appalled that Republican leadership would choose to believe a liberal news organization famous for their bias over an outstanding member of Congress who has served the people of Iowa and the United States honorably and faithfully for 16 years. If Congressman Steve King believed and stood by the outrageous misquote of the New York Times, then the actions taken against him would have been warranted, but the opposite is true.

Unlike North Korea, we in the United States are “innocent until proven guilty” and hold to the principles of Western Civilization, as Rep. King so admirably does. The foundational principle begins with the self-evident truth that “all men are created equal, that they are endowed by their Creator with certain unalienable Rights, that among these are Life, Liberty, and the pursuit of Happiness.” These are the principles to which Rep. King was referring and which he has championed for more than two decades of public service.

Don’t make the fatal mistake of turning the reins of the U.S. Congress over to the liberal media, allowing them to target, misquote, and falsely brand any member of Congress they wish to remove. We call on you to do the right thing as Minority Leader: issue a public apology and reinstate Rep. King to his committee assignments. If we don’t stand with this good man against the media-manufactured assault today, none of us will be safe from it tomorrow.