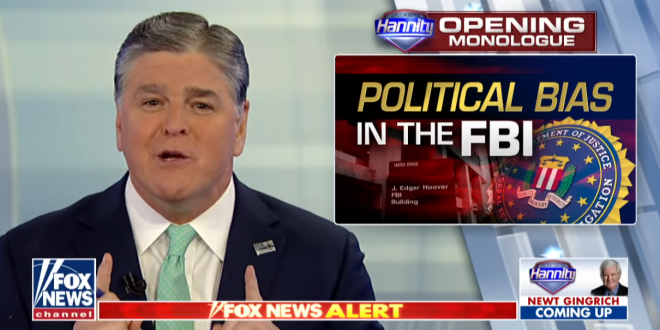 Hannity: The FBI Has Plotted To Destroy Trump [VIDEO]

“We now know top people within the FBI, filled with hatred, and frankly, anti-Trump rage, have put aside all values, and their blatant political bias, were seeking redemption for the firing of James Comey. They actually plotted to destroy your duly-elected president, and this goes way beyond what we already knew up until this point. Now, according to this report, Friday, New York Times, as usual, anonymous sources, several top FBI officials actually questioned whether or not President Trump was working directly for Russia.

“Now, they did this without a single shred of evidence, zero probable cause, zero proof of any collusion. It was a witch hunt. Admission of corruption, and abuse of power, by people that are unchecked, a bureaucracy unto itself, unlimited powers, no accountability, is any of this good for America? Do these deep state officials that we have been uncovering now for nearly two years — do they do anything other — these top officials — than hate the president? And are you really surprised?” – Sean Hannity, on last night’s show.