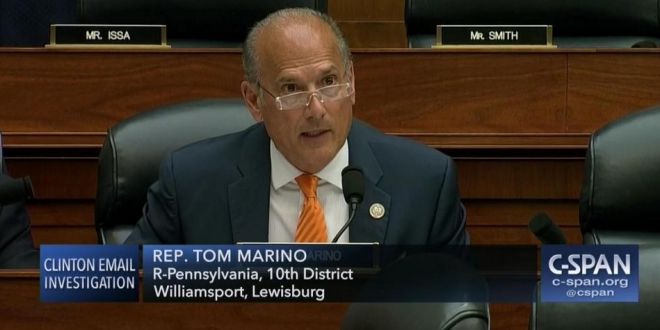 “As of January 23, 2019, I am officially stepping down from Congress,” Marino said in a statement. “Having spent over two decades serving the public, I have chosen to take a position in the private sector where I can use both my legal and business experience to create jobs around the nation.”

Marino won 66% of the vote in November and his district covers a wide swath of northern and central Pennsylvania.

The 66-year-old former county and federal prosecutor was one of Trump’s earliest supporters in Congress. Trump nicknamed Marino and former Rep. Lou Barletta “thunder and lightning” when they co-chaired his campaign in Pennsylvania.

Trump nominated Marino in 2017 to become the nation’s drug czar, but Marino withdrew his name from consideration after reports he played a key role in a law that weakened federal power to stop companies from distributing opioids.

My understanding of Pennsylvania law is that @GovernorTomWolf will now call a special election for @RepTomMarion's seat. https://t.co/EIQsNPZlEP
TBD how 2018 redistricting after court overturned partisan gerrymandering will affect that race; looks likely to be more competitive pic.twitter.com/tXxzTuwwV2

Always unusual when a member resigns at the beginning of his/her term to take a new job, setting up a costly special election and leaving a seat vacant. Tom Marino announces he’s leaving next week https://t.co/Vf7F02S6w8