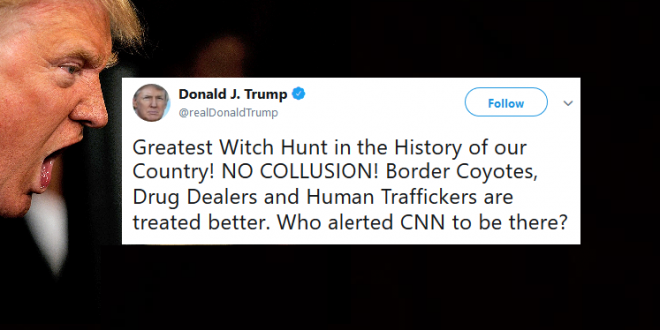 President Donald Trump on Friday lashed out after his longtime confidant Roger Stone was arrested as part of special counsel Robert Mueller’s investigation into his 2016 presidential campaign. Stone — who had repeatedly said that he expected to be indicted — has admitted to being in contact with Russian intelligence officers during Trump’s campaign, as well as with Wikileaks founder Julian Assange. A seven-count indictment charged him with obstruction of an official proceeding, false statements and witness tampering.

Greatest Witch Hunt in the History of our Country! NO COLLUSION! Border Coyotes, Drug Dealers and Human Traffickers are treated better. Who alerted CNN to be there?

Previous LIVE VIDEO: Roger Stone Appears In Court After Arrest
Next Pelosi On Stone’s Arrest: Interesting To See The Kind Of People Trump Has Surrounded Himself With [VIDEO]