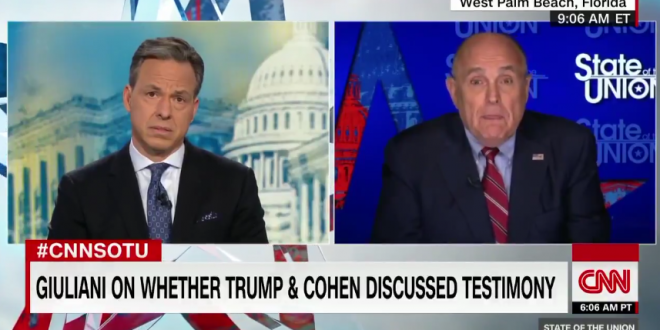 Giuliani Says Maybe Trump Did Talk To Michael Cohen Before Testifying To Congress But “So What?” [VIDEO]

President Trump’s personal attorney Rudy Guiliani on Sunday said it’s “possible” that president spoke to his former attorney Michael Cohen ahead of his congressional testimony. “Which would be perfectly normal,” Guiliani told CNN’s “State of the Union.” “So what?”

Rudy Giuliani: “As far as I know, President Trump did not have discussions … in which he told (Michael Cohen) or counseled him to lie. If he had any discussions with him, they’d be about the version of events that Michael Cohen gave them, which they all believed was true” pic.twitter.com/nJlbIMRhPk

CNN’s Jake Tapper: “Did President Trump or anyone on the Trump team ever have a conversation with Michael Cohen about his congressional testimony?”

Rudy Giuliani: “The President didn’t lie to the American people about it … He wasn’t talking to people in Russia about anything.” pic.twitter.com/Nv6eRXkbA9

Rudolph Giuliani tells @CNNSotu that Trump may indeed have spoken to Michael Cohen about his congressional testimony beforehand. “And so what if he talked to him about it?” Denies Trump told Cohen to lie.

it always seems to come down to giuliani admitting that trump did do something previously denied after all. followed by “and so what! that’s not a crime!”

Rudy Giuliani: “(President Trump) had conversations with Michael Cohen, but it was Michael Cohen driving the project … Do not think that just because he’s pleaded guilty to something that Michael Cohen’s telling the truth” pic.twitter.com/jk4LOiX9OD