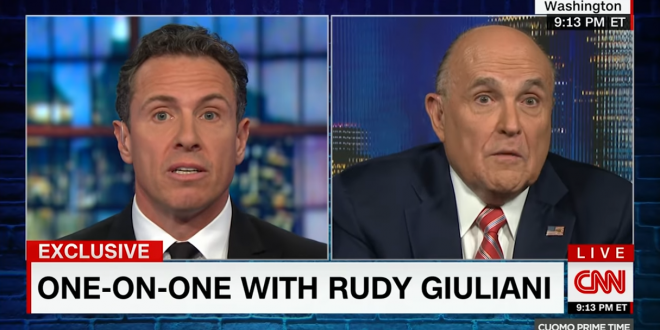 Giuliani: I Never Said There Was No Collusion [VIDEO]

Rudolph W. Giuliani claimed Wednesday night that he “never said there was no collusion” between President Trump’s campaign and Russia leading up to the 2016 presidential election. In a remarkable, at times contentious, interview with CNN’s Chris Cuomo, the president’s lawyer appeared to contradict his own past statements about collusion as well as what Trump and his supporters have repeatedly asserted.

On Twitter, Trump has used the phrase “no collusion” dozens of times, and a number of those instances were direct denials that his campaign was involved with the Russian government. Giuliani’s shocking declarations — several of which Cuomo called out as being false — quickly sent the Internet into a tailspin as many wondered what could have prompted the former New York mayor to suddenly change course.

“You just misstated my position. I never said there was no collusion between the campaign, or between people in the campaign; I have no idea,” Giuliani told CNN’s Chris Cuomo.

“I said the President of the United States. There is not a single bit of evidence that the President of the United States committed the only crime you can commit here, conspired with the Russians to hack the DNC.” Giuliani also said, falsely, that Trump himself had never said that his campaign had not colluded with Russia, but only that he himself had not.

“He actually did say that,” Cuomo shot back, referring to Trump’s previous statements on the matter, one of which was a very public assertion on Twitter last year that “the Trump campaign did nothing wrong—no collusion!”

Rudy, tell us what you know… https://t.co/AhBAFEpjPQ

Can’t help but wonder what shoe may be about to drop in the Mueller investigation if Rudy Giuliani is on cable news saying things like, “I never said there was no collusion between the campaign.”

Guess he knows they are finding witches.