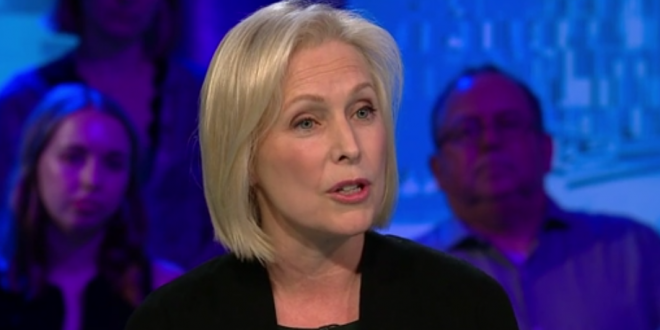 Gillibrand Defends Call For Al Franken To Resign: My Silence Meant Defending Him, Which I Wouldn’t Do

Sen. Kirsten Gillibrand defended her decision to call on former Sen. Al Franken to resign after allegations of unwanted touching and kissing were made against him, earning praise from a friendly audience of Iowans in Sioux City on Friday.

Gillibrand said Friday that she made the decision to help push him out because “my silence meant I was defending him and carrying his water, which I was unwilling to do.”

“Enough was enough,” Gillibrand said twice, arguing the tipping point in her decision was the eight allegations leveled against Franken. “Al Franken is entitled to whatever process wanted, if he wanted to say and wait six months for his ethics hearing. His decision was to resign. My decision was not to remain silent.”

Previous Trump: Impeach Me If You Want A Stock Market Crash
Next AXIOS: Trump To Offer DACA Deal For Wall Funding