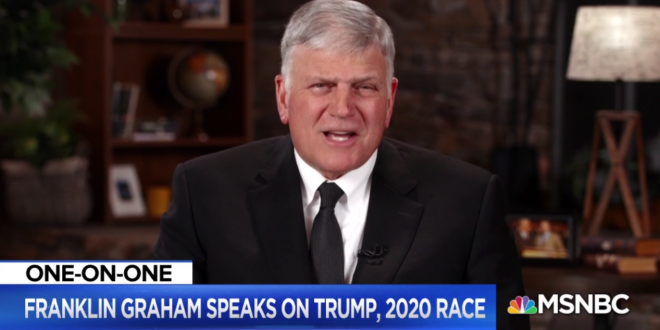 MSNBC’s Craig Melvin spoke with Evangelical leader Franklin Graham this morning and asked him about the number of false statements from President Donald Trump.

Melvin brought up a recent op-ed Graham wrote about the truth before noting that the most recent Washington Post tally of Trump’s false or misleading statements now stands at 8158. “How do you reconcile that?” he asked.

“But you can acknowledge that the president has said things that aren’t true,” Melvin asked. “I don’t think the president is sitting there behind the desk trying to make up lies,” Graham said. “I don’t believe that for a second. Has he misspoken on something? Sure, all of us do that, you do it, I do it.

“So I think the president is trying to do the best that he can under very difficult circumstances,” the pastor added. “But no one person can fix this, it’s too complex. We need God. As a nation, we’ve turned our back on God.”